In the nineteenth century, Montgomery County was a holiday destination thanks to several hot springs resorts. One of the largest was Montgomery White Sulphur Springs, incorporated in 1855. The Virginia-Tennessee Railroad brought guests from Lynchburg to the small station at Big Tunnel (Montgomery). From there, passengers rode cars propelled by gravity down to the resort. The idyllic vacation spot was transformed by the Civil War. From 1862 to 1865, Montgomery White Sulphur Springs operated as a Confederate general hospital under Dr. J. Lewis Woodville, Chief Surgeon. 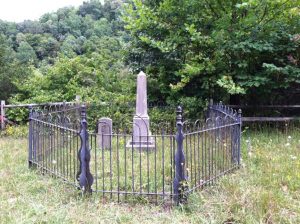 At its peak, Montgomery White accommodated up to 700 sick, wounded, and recovering Confederate soldiers. Space at the hospital was so limited at times that soldiers had to sleep in the bowling alley. Among the employees treating the troops and running the hospital were slaves and Catholic nuns from Charleston, South Carolina.

At least 265 Confederate soldiers died and were buried at Montgomery White Sulphur Springs during its time as a hospital. Although Union troops passed through the area in the last years of the war, the hospital was not disturbed. There were, however, sixty Federal soldiers recovering at the hospital when the Civil War ended.

Today, the soldiers’ cemetery, the slave cemetery, and what is known as the nuns’ cemetery are inaccessible to the public. The last remaining vestige of Montgomery White Sulphur Springs is the monument erected to honor the Confederate dead in 1889. Originally located on the main concourse at the resort during its heyday in the late nineteenth century, the monument was moved to its current location in 1949, forty-five years after the resort closed its doors and reverted to farmland. One resort hotel from Montgomery County’s past remains at Yellow Sulphur Springs, home to a modern health spa and located at 3145 Yellow Sulphur Road, between Blacksburg and Christiansburg. Two cabins from Montgomery White were bought when the resort closed and moved into Blacksburg, where they remain, remodeled as private residences, just down the road from the fire station and Virginia Tech airport.

The monument is on private property and is currently inaccessible.