To view recordings of recent events, check out our youtube channel.

Nov 30, 2020. “The False Cause: Fraud, Fabrication, and White Supremacy in Confederate Memory.” A free lecture and discussion with Dr. Adam H. Domby, part of the “New Perspectives on the Civil War Era” speaker series. View the recording on our youtube channel.

Oct 27, 2020. “America’s Original Opioid Crisis: Civil War Veterans and Opiate Addiction.” A free lecture and discussion with Dr. Jonathan Jones, part of the “New Perspectives on the Civil War Era” speaker series. View the recording on our youtube channel or on C-SPAN.

Oct 6, 2020. “Researching Civil War African Americans Workshop.” Our two expert presenters provided tips on the best methods and resources (many of them online), shared their own research experiences, and answered audience questions. Dr. Caroline Wood Newhall is the postdoctoral fellow at Virginia Tech’s Virginia Center for Civil War Studies, and an expert in Black POWs who were captured by the Confederacy. Dr. Kerri Moseley-Hobbs is a historian who wrote about her own enslaved ancestors in the book More than a Fraction.  View the recording on our youtube channel here. 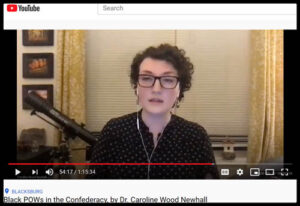 Sept 10, 2020. “‘Under the Rebel Lash’: Black Prisoners of War in the Confederate South.” A free lecture and discussion with VCCWS postdoc Dr. Caroline Wood Newhall, part of the “New Perspectives on the Civil War Era” speaker series. View the recording on our youtube channel or on C-SPAN.

May 30 – June 1, 2019. Conference: Microhistories of the Civil War Era. The conference was organized by postdoctoral associate Caitlin Verboon and featured 26 speakers including keynote speakers Judith Giesberg and Richard Bell.

April 24, 2019. “The Calculus of Violence: How Americans Fought the Civil War.” A lecture by Aaron Sheehan-Dean (Louisiana State University) on his new book.

March 24-26, 2019. Spring Campaign: The Virginia Peninsula. A two-night field trip to the historic sites of the Virginia Peninsula, including Fort Monroe, battlefields of McClellan’s Peninsula Campaign, and The Mariners’ Museum, led by expert guide Jonathan White.

Friday February 22, 2019. 12:15 p.m. “Empire on the Run: Refugees, Confederate Exiles, and the Gulf South at the End of the Civil War.” Lecture by Angela Diaz of Utah State University.

October 24, 2018. “Researching Your Civil War Ancestor.” A free workshop on how to research your great, great whoever.

September 7, 2018. “Making Space: Race and Southern Cities in the Civil War Era.” A free lecture by Caitlin Verboon, the VCCWS postdoctoral associate for 2018-2019.

April 16, 2018. Researching your Civil War Ancestor. A free workshop on how to research your great, great-whoever.

March 18-20, 2018. Spring Campaign: The Shenandoah Valley. A two-night field trip to the beautiful Shenandoah Valley, including a visit to the historic town of Lexington and a tour of “Stonewall” Jackson’s 1862 Valley Campaign, led by expert guide Jonathan Noyalas.

Feb 16, 2018. “Between Slavery and the Want of Railroads: Reconstruction in Western North Carolina.” A lecture by Steven Nash (East Tennessee State University), part of the Legacies of Reconstruction Series.

Oct 25, 2017. “More than a Fraction: Discovering my Enslaved Ancestors at Smithfield Plantation.” A free lecture by Dr. Kerri Moseley-Hobbs, co-sponsored with the Smithfield-Preston Foundation.

April 29, 2017. “Death and Dying in the American Civil War: How accurate is Mercy Street‘s depiction?” A lecture and screening with award-winning historian Dr. Shauna Devine, historical consultant for the hit PBS series “Mercy Street,” at the Lyric Theatre.

March 19-21 2017. Spring Campaign: Petersburg. An optional two-night field trip immediately following Civil War Weekend. We enjoyed a memorable trip to the city where the Civil War entered its final stages, including a guided tour of Petersburg National Battlefield, a behind-the-scenes visit to Pamplin Historical Park, and meals in historic restaurants.

March 31, 2017. “What the Freedmen Desire: Sidney Andrews’ and John Dennett’s Perspectives on the Freedmen and the Post-Civil War South.” A lecture by Darin Waters (UNC-Asheville), part of the Legacies of Reconstruction series, organized by Dennis Halpin and Paul Quigley.

Feb 10, 2017. “Until Freedom is Proclaimed throughout the World: African American Global Visions of Reconstruction.” A lecture by Paul Ortiz. Part of the Legacies of Reconstruction series, organized by Dennis Halpin and Paul Quigley.

Sept 23, 2016. “The American Civil War, Emotional Politics, and the Widows of the Confederacy.” A lecture by Angela Elder, 2016-17 VCCWS Postdoctoral Associate.

Sept 9, 2016. “The Great New Orleans Kidnapping Case of 1870 and the Fate of Reconstruction.” A lecture by Michael Ross (Maryland), part of the Legacies of Reconstruction series organized by Dennis Halpin and Paul Quigley.

April 26, 2016. “Capital Dames: The Civil War and the Women of Washington, 1848-1868.” A free public lecture and book signing by Cokie Roberts, political commentator for ABC News and NPR and author of Capital Dames. Sponsored by the Virginia Center for Civil War Studies with support from the College of Liberal Arts and Human Sciences, the Department of Communication, and the Department of History.

April 1, 2016. “The Freedwoman’s Tale: Reconstruction Remembered in the Federal Writers’ Project Ex-Slave Narratives.” A lecture by Carole Emberton, part of the “Legacies of Reconstruction” series organized by Dennis Halpin and Paul Quigley.

September 25, 2015. “The Strange Career of ‘Social Equality’:  Race, Space, and the Segregation of Cemeteries in Postemancipation Arkansas.” A lecture by Hannah Rosen (William and Mary), part of the “Legacies of Reconstruction” series organized by Dennis Halpin and Paul Quigley.

September 17, 2015. “Disunion, Then and Now: The New York Times and the Civil War at 150.” A lecture by Clay Risen, senior editor at the New York Times op-ed page who oversaw the newspaper’s sesquicentennial coverage.

July 30-August 2, 2015. Remaking North American Sovereignty. The Center was proud to support this innovative international conference comparing the political crises of the 1860s in the U.S., Canada, and Mexico.

April 23-25, 2015. Citizenship in the Era of the American Civil War. An academic conference exploring the many transformations in citizenship that took place during the era of the Civil War. Featuring 24 speakers from across the United States and Europe.

March 31, 2015. “Citizens of Heaven and of the United States:  Black Protestants in the Age of Emancipation.” A lecture by Charles Irons, Chair of the History Department at Elon University. Sponsored by the Residential College with support from VT’s Department of Religion and Culture and the Virginia Center for Civil War Studies.

March 2, 2015. 5 p.m. Opening reception, “Lincoln in Our Time” Exhibition. Newman Library, 2nd floor. To mark the 150th anniversary of Abraham Lincoln’s assassination, VCCWS postdoc Kimberly Kutz created an exhibition that explored reactions to the assassination and Lincoln’s enduring legacy in American life. Featuring documents from VT Special Collections, relics such as fabric from Lincoln’s coffin, and videos produced by VT students. The exhibition will be on display until April 15, and accompanies the April 10-11 symposium “Lincoln in Our Time” (see below).

October 18, 2015. Civil War Film Series: Shenandoah (1965). The University of Georgia’s Prof. John Inscoe visited Blacksburg to speak on the significance of Shenandoah to Civil War and Appalachian history. A lively discussion with the audience followed.

September 24, 2014. “Images of Lincoln’s Ghost and Mourning after the Civil War.” A talk given by VCCWS postdoc Kim Kutz as part of the Department of Religion and Culture’s Brown Bag series.

June 22-27, 2014. Campaigning with Lee summer seminar, Ashburn, Virginia. A group of VT alumni and friends toured the Second Bull Run battlefield and Mosby’s Confederacy, and heard talks on subjects ranging from “The Stench of Death” to “The Long Shadow of Lincoln’s Gettysburg Address.”

March 14-16, 2014. Civil War Weekend. VT Alumni and other Civil War enthusiasts gathered at the Inn at Virginia Tech for the 23rd annual Civil War Weekend. In addition to talks by former VCCWS director James I. Robertson, Jr. and William C. Davis, and other speakers, attendees got to see a nineteenth-century photography demonstration.

February 21, 2014. “Visualizing Emancipation and the Affordances of Digital Humanities.” A talk by Scott Nesbit, associate director of the Digital Scholarship Lab at the University of Richmond.