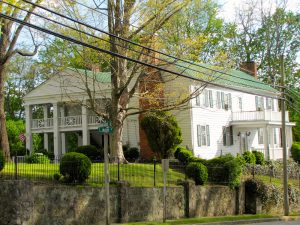 This home was built sometime between the 1780s and 1812. The portion to the left of the front door is an early log structure, expanded and covered with wood siding by nineteenth-century occupants. It is often referred to as the Montague-Crush House after two longtime resident families. Rice D. Montague purchased the house in 1825. Before that, it was known as “Morrison’s red house,” giving a hint of the original home’s color. The Montague family owned the house for over a century before Judge Charles W. Crush bought it in 1938. Confederate Generals Stonewall Jackson and J. E. B. Stuart may have stayed in this house during the Civil War. Union general George B. Stoneman headquartered here in April 1865 when his troops occupied Christiansburg. Stoneman’s raiders, tasked with destroying the essential Virginia and Tennessee Railroad in Southwest Virginia, reached Christiansburg the night of April 4 after marching north from Jacksonville (Floyd). Stoneman’s cavalry first heard the news of the fall of Richmond while encamped in Christiansburg.

From Blacksburg, take 460 Eastbound to the Downtown Christiansburg exit. Follow North Franklin Street into downtown Christiansburg and take a left onto East Main Street. The house is up the hill on the right hand side after St. Thomas Episcopal Church. The Montague House is a private residence, but can be admired from the street.