In December 1864, Union major general George Stoneman left Knoxville, Tennessee, on his way to southwestern Virginia in hopes of destroying vital Confederate infrastructure in the region, such as the bridges of the Virginia and Tennessee Railroad. General John C. Breckinridge, commander of all Confederate troops in southwestern Virginia, concentrated his forces at Saltville to protect the salt mines, but Stoneman bypassed Saltville on his way north. Realizing he had left most of southwestern Virginia at the mercy of Union invaders, Breckinridge moved his force of 1,000 soldiers east and encountered the 4,000 Federal troops near Atkins, a small community northeast of Marion, on December 17. Having engaged the enemy, Breckinridge fell back to a bluff on the north side of the middle fork of the Holston River closer to Marion, and Stoneman occupied a position on the south side of the Holston. 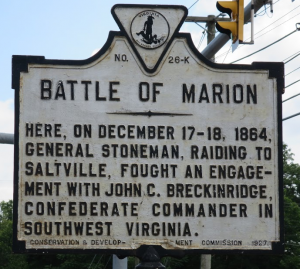 The two forces exchanged artillery fire during the evening near a covered bridge, but Stoneman made no serious attempt to cross it, preferring to wait until all of his command could join the engagement. The next morning, the battle resumed. The Union soldiers focused on both the covered bridge and a nearby ravine, in hopes of crossing the river and overrunning the outnumbered Confederates. In spite of their numerical inferiority, Breckinridge’s Confederates held a strong position and for much of the day were able to counter Stoneman’s maneuvers, at one point even counter-charging the Union lines. During the afternoon and evening, however, the Confederates began to run out of ammunition. Flanked by Stoneman’s men and facing potential destruction, Breckinridge quietly withdrew in the early morning hours of December 19, leaving Stoneman to move virtually unimpeded throughout Southwest Virginia. In the ensuing days, Union soldiers destroyed not only the salt mines at Saltville, but also two iron foundries in Marion before returning to East Tennessee.

The Marion battlefield has not been preserved. There is an interpretive marker, however, that describes the battle, and the US-11 bridge that crosses the middle fork of the Holston River is located near the site of the original covered bridge. To find the interpretive marker, take I-81 S to exit 47. Turn left onto US-11 S and the marker will be on your left after .3 miles, across the road from the entrance to the Smyth County Community Hospital. On your way, you will drive across the US-11 bridge.

Continue down US-11 South into downtown Marion to view the 1903 Smyth County Confederate monument on the grounds of the courthouse. Before reaching the monument, you will find another historical marker along East Main Street between Cedar Street and Hospital Avenue. This marker tells the story of Col. William Elisha Peters, who served in the Confederate army and refused to take part in the burning of Chambersburg, Pennsylvania. He is buried nearby.