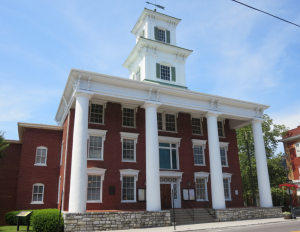 Abingdon, the seat of Washington County, has always been a watershed for history thanks to its position on the Great Road leading westward into Tennessee. The picturesque small town found itself in the path of destruction when George Stoneman’s Union forces attacked Saltville in December 1864. Stoneman’s men passed through Abingdon and destroyed the railroad and other supplies before moving on. The Arts Depot at Depot Square stands on the site of the original depot burned in 1864.

A local Union soldier passed back through his hometown with Stoneman. Bent on personal revenge, the man stayed behind and burned the courthouse to the ground. The courthouse that stands now in Abingdon is an 1868 replacement. This graceful Italianate structure bears the distinction of being the only courthouse in Virginia built during the Reconstruction era. A 1907 Confederate Monument stands to the left of the courthouse and beyond that on the same side of the street is the Col. James White House, which was partially damaged by the 1864 fire and restored two years later. Another monument on the courthouse lawn honors the Confederate generals from Washington County—Joseph E. Johnston, who spent his childhood in Abingdon; William “Grumble” Jones; John Preston; W.Y.C. Humes; and John B. Floyd, antebellum governor of Virginia and brigadier general during the war. Floyd is buried in Sinking Spring Cemetery at the end of Valley Street. The building he used as a law office still stands at 159 E. Main St.

Many buildings in town date back beyond the Civil War. The 1779 tavern (222 E. Main St.), the oldest building in town, served as a hospital for wounded Civil War soldiers, as did the adjacent Virginia House (Dunn’s Hotel). The servants’ dwelling at Cave House, built in the decade before emancipation, recalls the thriving slave economy of the town and region. Landon Boyd was one Abingdon slave who made a name for himself after emancipation. Trained as a brick mason, Boyd served in the US army during the Civil War and was a member of the jury selected for the treason trial of Confederate president Jefferson Davis in 1867. The trial never happened. Boyd, who had moved to Richmond after the war, served on the city council there from 1872-1873 and served as Assistant Assessor of US Internal Revenue. He returned to Abingdon in 1878.

To get a taste of Abingdon during the Civil War, visit the Fields-Penn 1860 House Museum (208 W. Main St.). Completed in 1860, this house is interpreted as a museum of antebellum and Civil War life. 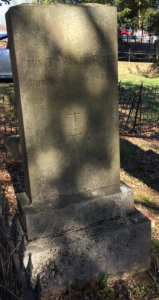 From Blacksburg, take I-81 S to exit 17 and turn right onto Cummings St. An interpretive sign is located in the yard of the Fields-Penn 1860 House Museum, which will be on your left at the intersection of Cummings and Main St. (208 W. Main St.). A second interpretive sign is located in Landon Boyd Park. From the Fields-Penn House, turn right onto W. Main St., go straight for 0.4 miles, and turn right onto Pecan St. SE. After 0.1 miles, Pecan will turn into Green Spring Rd. Turn left onto A St. SE immediately after crossing the railroad tracks and the park and interpretive sign will be on your left after 0.3 miles. To find Sinking Springs Cemetery from Landon Boyd Park, continue back the way you came on A St. towards Green Spring Rd. Turn right onto Green Spring/Pecan and then left onto Valley St. NE after 0.8 miles. The cemetery will be at the end of the road. Drive into the cemetery and follow the path to the right. You will see an enclosure with memorials to the Confederate dead buried in the cemetery on your right. Across the path from the memorials is the grave of John B. Floyd, facing away from the path. To see the historic heart of Abingdon, park by the courthouse (189 E. Main St.) and walk around, or drive up and down Main to see the sites listed in the description above.

Next Page: Battle of Cloyd’s Mountain >>