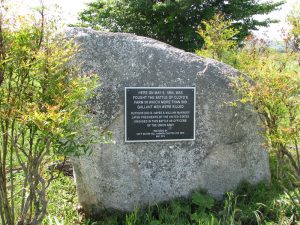 In 1864, under the orders of General Ulysses S. Grant, Brigadier General George Crook and three brigades of the Army of West Virginia marched south through the Appalachian Mountains, intent on destroying the Virginia & Tennessee Railroad. This railroad was under the protection of Brigadier General Albert G. Jenkins’s few Confederate units.

On May 9, 1864, after receiving reports of Union forces in the area, Jenkins prepared for defense at Cloyd’s Mountain, near Dublin in Pulaski County. Local men joined in the defense, including Rev. William P. Hickman, minister of the Blacksburg Presbyterian Church, and his New Dublin Presbyterian congregation. Hickman’s church in Blacksburg (now Cabo Fish Taco) is the only antebellum worship structure still standing in the town. The current New Dublin Presbyterian Church was built in 1875, incorporated an earlier structure. Rev. Hickman was wounded in the fray and died later of his injuries.

Early fighting at Cloyd’s Mountain appeared to favor Confederates and their strong defensive position, but persistent Union attacks eventually broke through, forcing the Confederates to retreat. The battle lasted for one fierce hour, devolving into brutal hand-to-hand combat. One participant recalled that “most of the regiments engaged in it had served in greater and more important battles, but all united in the opinion that, for fierce and deadly intensity, Cloyd[‘s] Mountain exceeded them all” (Whisonant 161). Making matters worse, a fire broke out on the battlefield and many wounded soldiers perished in the flames.

Confederate forces lost not only the battle, but also their commander. Jenkins was wounded in battle, and later died in hospital due to improper care after an amputation. Casualties were high for the relatively low number of troops engaged and the short duration of the battle: 688 Union and 538 Confederate.

After the battle, victorious Union forces pressed further into Virginia, burning the Virginia and Tennessee Railroad depot at Dublin before turning towards the strategically important New River Bridge at Central Depot (Radford). Dublin Depot was important as a supply depot and as one of three locations in Virginia where captured runaway slaves were kept until their owners could reclaim them. The current historic depot building dates to 1913. Crook destroyed the New River Bridge on May 10 and turned towards Blacksburg the next day. Crook’s men camped on the grounds of Mountain View (the 1850s manor house still stands in the south end of Blacksburg, a private residence) and wounded Federal soldiers were treated at a field hospital set up in the home of local cattle farmer C. M. Broce. The Broce plantation house, built c. 1843, is now home to Virginia Tech’s Alpha Gamma Rho fraternity. William Averell’s men followed Crook through Blacksburg May 12, 1864, confiscating food and valuable from the local citizenry. 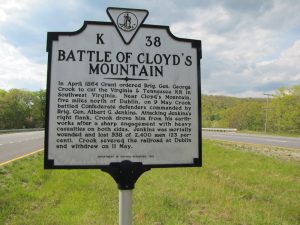 From Dublin, Virginia, take State Route 100 North until you arrive in the vicinity of 5702 Cleburne Boulevard. A historical marker and plaque stand at the Cleburne Wayside on the left. The grave of Captain Christopher Cleburne, CSA, stands nearby at the place where he fell mortally wounded during the battle. Another historical marker stands further north on Rt. 100, just before the road crosses Cloyd’s Mountain itself.

Alpha Gamma Rho, “The Broce Plantation and the Civil War.”