For many Confederate citizens in Southwest Virginia, Union general George Stoneman’s 1865 raid was the most terrifying experience of the Civil War in their immediate vicinity. Stoneman and four thousand cavalry troopers set out from Knoxville, Tennessee, in March 1865 to attack Confederate infrastructure in North Carolina and Southwest Virginia. On April 3, Stoneman’s raiders crossed the Virginia line through Fancy Gap in pursuit of a Confederate wagon train. Their first stop after capturing the train was Hillsville, the seat of Carroll County, where the raiders clashed briefly with the Confederate Home Guard before occupying the town. At Hillsville, Stoneman divided his force, sending Colonel John Miller and a detachment to destroy the railroad, bridges, and lead mines at Wytheville. Miller and his troopers overpowered Wytheville’s Home Guard and effectively disabled Wytheville, destroying the Virginia and Tennessee Railroad depot and a large amount of supplies before also burning the railroad depot at Max Meadows. Confederate cavalry under Col. Henry L. Giltner drove the Federals out of Wytheville on April 4, too late to halt the destruction. Miller’s men then wrecked the lead mines near Wytheville, which until that point had provided roughly one-third of the Confederacy’s lead, material essential to the war effort.

Meanwhile, Stoneman’s main force advanced from Hillsville to Jacksonville (modern-day Floyd, the seat of Floyd County), burning farms along the way. At Jacksonville they met with some resistance from locals, engaging in a running fight through the streets before several prominent citizens formally surrendered the town, which suffered little destruction. Stoneman paused briefly at Jacksonville, sending William Wagner and another detachment towards Salem with orders to destroy the railroad there and then continue to Lynchburg. Wagner’s men accepted the surrender of Salem on April 5, destroying the depot there. They continued towards Lynchburg, burning the bridges over the Big Otter and Little Otter rivers at Peaks of Otter. Though Wagner’s approach of Lynchburg caused panic, he did not attack it, instead turning south to meet up with the rest of Stoneman’s force after coming within six miles of the city. The presence of the Federal raiders so near may have contributed to General Robert E. Lee’s decision to surrender at Appomattox on April 9, just two days after Wagner burned the Otter bridges.

General Stoneman and his remaining troopers stole into Christiansburg in the pre-dawn hours of April 5, capturing the telegraph office in an attempt to find out information about Confederate forces in the area. Stoneman set up his headquarters in the Montague House and set his men to work destroying the main target of their Virginia raid, the Virginia and Tennessee Railroad. The raiders destroyed tracks and burned the Cambria Depot, learning of the fall of Richmond on April 5. The Union cavalry also destroyed the New River Bridge at Central Depot (Radford) again as it had been rebuilt since the first attempt to disable it in 1864. Colonel Luther Trowbridge’s detachment destroyed bridges at Big Lick (Roanoke), staying at Salem. Stoneman and his men left Christiansburg on April 6, having achieved their goal of crippling one of the Confederacy’s most vital railroads. The raiders rode south back through Jacksonville and met up with Miller’s detachment at Taylorsville (Stuart, seat of Patrick County), where they burned the jail before moving back into North Carolina to meet Wagner’s men. Wagner passed through Rocky Mount and met Trowbridge at Henry Court House (Martinsville). Trowbridge had engaged with Confederate cavalry troops under James T. Wheeler at Henry Court House, who retreated towards Danville after the skirmish. The last of Stoneman’s raiders left Virginia on April 9 on their way to Salisbury, North Carolina.

Suggested route: From Blacksburg, take US-460 East to I-81 South. Continue about 36 miles and then take exit 81 for I-77 South. Follow I-77 South to exit 14, then turn left onto US-221 North. Follow US-221 into downtown Hillsville. This was the raiders’ first stop after riding north from North Carolina. From Hillsville, continue on US-221 North, the Floyd Pike, for about 28 miles. US-221 becomes Main Street in Floyd, which Stoneman’s men passed through on their way to and from Christiansburg. Next, take VA-8 North 20 miles from Floyd to Christiansburg, the main target of Stoneman’s raid in Virginia. Visit the Christiansburg sites on our tour while you are in town. From Christiansburg, follow Stoneman’s path to Stuart, following VA-8 South through Floyd and continuing another 26 miles. Check out the historic Patrick County Courthouse, built in 1822, where Stoneman’s cavalry burned the jail on their ride south. 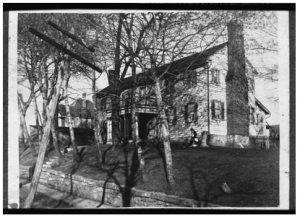 Alternate routes: From Hillsville, follow Miller’s detachment to Wytheville. Take I-77 North back to I-81 South and continue south to Wytheville, where you can use the Wytheville page on this tour to explore. Come back through Hillsville and take US-58 South 28 miles to Stuart.

From Floyd, ride with Wagner’s detachment to Salem. Take US-221 North out of Floyd for about 30 miles. Turn left onto VA-694 and follow the road 8.5 miles to Riverside Drive. Turn right and bear right onto Piedmont Avenue, then left onto Eddy Avenue and left again onto Union Street, which leads to Main Street. From Christiansburg, you can follow Trowbridge to Salem via US-11 North. Trowbridge continued south from Salem: take East Main Street, which become Alt 11/US-460 East into Roanoke. Merge onto I-581 South/US-220 South and continue on US-220 South 52 miles, passing through Rocky Mount before arriving in Martinsville. Or, follow Wagner towards Lynchburg on Alt 11/US-460. Stop in Bedford, known as Liberty when Stoneman’s raiders passed through in 1865. Take US-221 North/Forest Road and turn right onto VA-715/Lowry Road to pass through Lowry, near where Wagner’s men burned the bridges over the Big and Little Otter Rivers. Then follow VA-715 South to US-460 West and turn left onto VA-122 South to Rocky Mount. Continue on US-220 South to Martinsville, where you can visit the historic 1824 Henry County Courthouse on Main Street.

Note: These routes are approximate, given the differences between traveling on horseback and traveling by automobile.