Colonel Robert Taylor Preston built Solitude (the oldest building on the Virginia Tech campus) in its current configuration around a much earlier log cabin structure in 1851. The son of Virginia governor James P. Preston and grandson of William and Susanna Preston, founders of neighboring Smithfield Plantation, Robert Taylor Preston served as a Justice of the Peace in Montgomery County as well as in the local militia before the Civil War broke out in 1861. 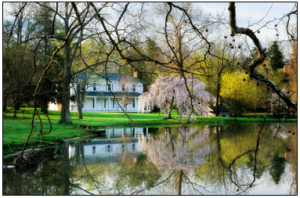 Once the war started, Preston gained an appointment in the Provisional Army of Virginia as a Colonel of Volunteers. In July 1861 he became the commanding officer of the 28th Virginia Infantry Regiment, with the rank of colonel in the new Army of the Confederate States of America. When the unit was reorganized in April the following year, he was replaced as colonel and returned home to Solitude. He was instrumental in helping to maintain a local volunteer militia force, and on May 13, 1863, he called for the men of Montgomery and Roanoke Counties to help defend against invading Union forces in the New River Valley. In August 1864, Preston was appointed lieutenant colonel, and later colonel, of the 4th Virginia Reserves. These troops went on to defend Saltville against Union raiding parties. Several of the men under the command of Colonel Preston surrendered with the army under the command of General Joseph E. Johnston at Bennett Place, North Carolina, outside of Durham on April 26, 1865.

After the war, Preston sold Solitude for the sum of $21,000. Thanks to the Morrill Land Grant College Act of 1862, the Commonwealth of Virginia was able to purchase the property in order to establish the new Virginia Agricultural and Mechanical College in 1872.

From downtown Blacksburg, take Washington St. SW and turn right onto West Campus Drive. After passing the drillfield on the right, Solitude will come into view on the left, directly east of the Duck Pond.