Pound Gap, located between Wise County, Virginia, and Letcher County, Kentucky, was a strategic invasion site for both sides during the Civil War. Confederate brigadier general and native Kentuckian Humphrey Marshall used Pound Gap to invade Kentucky in the fall and winter of 1861, where he for a time moved nearly unmolested toward the Ohio River. Union troops under the command of future US President Colonel James A. Garfield drove Marshall’s troops back at the Battle of Middle Creek. By early February 1862, the Confederates had retreated to Virginia. 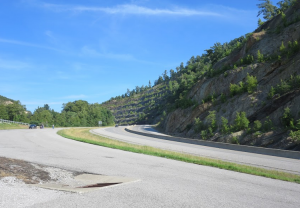 Garfield and Marshall eyed each other warily during January and February 1862, but the Confederates still controlled Pound Gap. Hearing that the majority of Marshall’s troops had withdrawn to Gladeville (now Wise, Virginia) and hoping to take advantage of the rumored strong unionist sentiment in Southwest Virginia, Garfield advanced on Pound Gap on March 16, 1862, defeating the tiny Confederate garrison. Garfield did not continue far into Virginia, but spent a day destroying Confederate supplies.

In September 1862, Marshall again led a force through Pound Gap into eastern Kentucky as part of the larger Confederate effort to capture the Bluegrass State. Again the Confederates returned to Virginia disappointed, after larger Confederate armies had withdrawn and many native Kentuckians had deserted. Brigadier General William Preston of Kentucky soon replaced Marshall in command.

The next summer, Confederate troops led by Colonel Benjamin Caudill watched the mountain pass from their camp in Gladeville, but were overrun by invading Union soldiers on July 7, 1863. After destroying Gladeville, the Union force returned quickly to Kentucky through Pound Gap and were back in the Bluegrass State by July 11. Nearly a year later on June 1, 1864, John Hunt Morgan rode from Abingdon to Pound Gap and into eastern Kentucky to raid Union supplies, rob banks, and relieve pressure on the Confederate salt works at Saltville, Virginia. Morgan and his men were defeated near Cynthiana, Kentucky, and returned to Virginia on June 20. In September 1864, 5,000 US troops invaded Virginia through Pound Gap on their way to Saltville. Confederates repulsed them at Saltville, and Burbridge’s command retreated through Pound Gap after defeating the Confederate force of irregulars that attempted to stop their passage. Two months later, on December 27, 1864, Burbridge’s men entered Kentucky through Pound Gap once more, after the destruction of Saltville.

To visit the Kentucky Civil War memorial dealing with Pound Gap, continue on US-23 from the interpretive sign for 0.5 miles and turn right. The monument is up the hill above the highway. There is a sign that will direct you toward it. The Kentucky state historic marker and overlook is 0.3 miles from the Kentucky Civil War memorial on the right side of US-23. The Virginia state historic marker for Pound Gap is in the parking lot of the Marathon Gas Station.

Wise County is also home to the Southwest Virginia Museum, which has rotating displays on the history of the region. Driving south from Wise, away from Pound Gap, continue down US-58 to Exit 1 for US-58 Alt, which leads into downtown Big Stone Gap. The museum is located at the corner of Wood Avenue and West 1st Street.