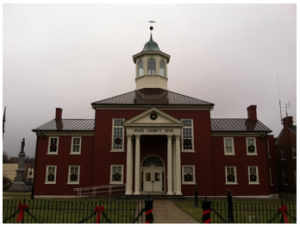 Pearisburg is the seat of Giles County. The Civil War came to the small town of Pearisburg on May 6, 1862, when Union troops under the command of Lieutenant Colonel Rutherford B. Hayes arrived from Princeton (today West Virginia). The Federal soldiers took the town quickly, capturing several Confederate officers and soldiers and a large quantity of Confederate commissary supplies. The town was so small that some Union troops had to sleep in the courthouse (built 1836). Lt. Col. Hayes used Dr. Harvey Green Johnston’s small office as his headquarters. The office, built in 1857, still stands on the grounds of the Andrew Johnston House, built in 1829 and now home to the Giles County Historical Society. During the Federal occupation of Pearisburg, Hayes and his officers most likely stayed at the Woodrum Hotel on Main Street (no longer standing).

The Federal hold on Pearisburg was tentative and did not last. Though reinforcements were ordered to the town on May 9, Confederate forces under Brigadier General Henry Heth began their march that same night and reached Pearisburg from the south early on the morning of May 10. Outnumbered, Hayes ordered a retreat and Confederate soldiers followed Union troops as they drew back north along Main Street. Retreating Federal soldiers set fire to the Presbyterian Church across the street from the Johnston House, hoping to destroy the captured supplies they had stored there. According to local tradition, the soldier guarding the burning church was shot dead and the church saved by Pearisburg’s citizens. After the Federal retreat, the courthouse was used as a hospital. Only two soldiers—one Union, one Confederate—were ever confirmed dead after the skirmish, though reports of greater casualties abounded. Five Unknown Confederate Dead are buried under a marker in Angel’s Rest Cemetery, down the street from the courthouse. 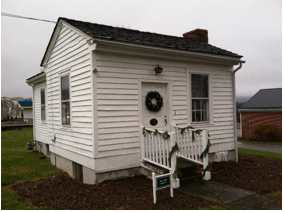 The Battle of Pearisburg was significant because Heth’s Confederates stopped the Union advance into Southwest Virginia. The Virginia and Tennessee Railroad, the ultimate target of the Federal troops, was not destroyed until after the Battle of Cloyd’s Mountain in May 1864. The skirmish at Pearisburg is also interesting because two future United States Presidents took part in the fight: Lt. Col. Rutherford B. Hayes (President 1877-1881) and Commissary Sergeant William McKinley (President 1897-1901). 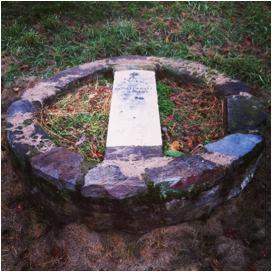 To reach Pearisburg from Blacksburg, take 460 Westbound to the first exit for Pearisburg onto 460 Business/Wenonah Ave. Follow Wenonah Avenue to Main Street. The courthouse and 1909 Confederate Monument stand at the intersection of Main and Wenonah. A historical marker at the courthouse lays out a brief history of the town, including the May 1862 skirmish. The Five Unknown Confederate Dead marker in Angel’s Rest Cemetery can be reached by following Wenonah Ave. to its end. The cemetery is marked by a stone wall on your right. To visit the Johnston House, office, and Historical Society, turn right onto Main Street. The house is located a tenth of a mile down Main Street, on the right.