Since 2015, VCCWS director Paul Quigley and Dennis Halpin, both Virginia Tech history faculty, have organized the Legacies of Reconstruction speaker series. In the wake of the Civil War sesquicentennial of 2011-2015, Halpin and Quigley wanted to provide an ongoing forum for students, faculty, and the general public to learn more about the important yet often misunderstood period that followed the war. The central issues of Reconstruction–racial equity and the boundaries of American citizenship–have persisted right down to our own time. And so, speakers have addressed not only the events of 1865–77 but also their long-term consequences and legacies over the last 150 years.

Lectures in the series have been supported by the College of Liberal Arts and Human Sciences, the Department of History, the Gloria D. Smith Professor of Black Studies, and the MA program in Material Culture and Public Humanities, as well as the Virginia Center for Civil War Studies. 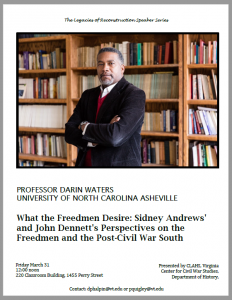 Feb 16, 2018. Steven Nash, “Between Slavery and the Want of Railroads: Reconstruction in Western North Carolina.”

March 31, 2017. Darin Waters, “What the Freedmen Desire: Sidney Andrews’ and John Dennett’s Perspectives on the Freedmen and the Post-Civil War South.”

Feb 10, 2017. Paul Ortiz, “Until Freedom is Proclaimed throughout the World: African American Global Visions of Reconstruction.” 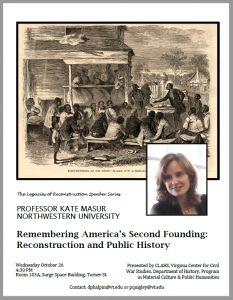 Sept 9, 2016. Michael Ross, “The Great New Orleans Kidnapping Case of 1870 and the Fate of Reconstruction.”

September 25, 2015. Hannah Rosen, “The Strange Career of ‘Social Equality’:  Race, Space, and the Segregation of Cemeteries in Postemancipation Arkansas.”