The manor house at Kentland was built sometime between 1820 and 1835 in the Federal style. Kentland is named for James Randal Kent and his descendants, although the plantation did not bear this name until after the Civil War. The land was originally known as Buchanan’s Bottom. The house is a two-story, five-bay structure. Family tradition holds that the architect of Kentland was a former Hessian soldier named John Swope. The bricks were made by hand by slaves. An original hexagonal smokehouse and several later farm buildings still stand on the property, which is owned today by Virginia Tech and used as the College of Agriculture and Life Sciences Farm. 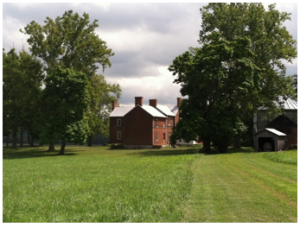 Rear of the manor house at Kentland, with smokehouse to the far right. (Tom Seabrook)

Kent’s plantation was the largest and most prosperous in Montgomery County on the eve of the Civil War. Over 120 slaves worked the farm, though James Randal Kent may have owned up to 300 combined on his other properties. The Kent family property around Buchanan’s Bottom alone totaled 5,850 acres. When Virginia seceded in 1861, James Randal Kent, already a major in the local militia, helped organize Confederate troops and contracted to supply meat and other food to the new Confederate Army.

The war reached Kentland in 1864. First, the court records of Montgomery County were spirited away to Kentland by night for fear that Union invaders would burn them when they came through Christiansburg. These records sat in the attic at Kentland for the next century before disappearing thanks to souvenir hunters. General George Crook’s Yankee soldiers appeared at the plantation in May 1864 after the Battle of Cloyd’s Mountain. For several days, Federal troops camped on the Kent property, destroying the meat destined for Confederate soldiers and the family table. The soldiers also burned some outbuildings and would have burned the manor house had James Randal Kent not refused to leave.

Several dozen Kentland slaves left with the Union army when they marched out. Some trickled back. After the war, Kent’s wife Elizabeth established the community of Wake Forest for freed slaves. She is buried beneath the angel monument in the Kent-Cowan cemetery near the manor house. Many Wake Forest residents can trace their ancestors to the fields of Kentland. In the early 2000s, the old Kentland slave cemetery was rediscovered and a memorial marker placed to commemorate the contributions of the men and women who built Kentland. 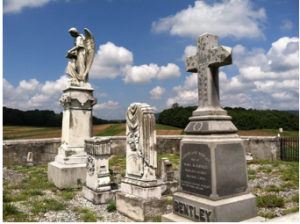 To reach Kentland from Blacksburg, take Prices Fork Road heading south and turn right onto McCoy Road, then take a left onto Whitethorne Road and look for signs at the main gate. To set up a tour, please call (540) 231-9596 or email Dr. Sam Cook.