By Kelly Cooper and Brett Romig. 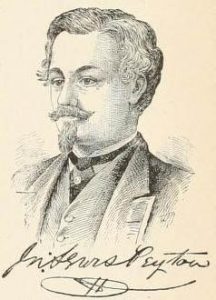 Life before the Civil War

John Lewis Peyton was born on September 15, 1824 in Staunton, Virginia to John Howe Peyton and Anne Montgomery Lewis. His military experience began at the Virginia Military Institute in Lexington, Virginia. Illness prevented Peyton from finishing school at VMI, but he later transferred to the University of Virginia and studied law.

Four years after graduation, in 1848, he travelled west to Jefferson City, Missouri and recalled his experiences in his memoir, Over the Alleghanies and across the Prairies—Personal Recollections of the Far West, One and Twenty Years Ago. This piece was one of many that he produced throughout his lifetime. In the following 10 years, Peyton travelled across Europe due to his involvement in the Millard Fillmore administration. While in Chicago, he met Henrietta Washington and married her in 1855. They returned to live on a plantation in the western portion of Augusta County near Staunton.

Outbreak of the Civil War

Despite opposing secession, Peyton sided with Virginia at the outbreak of the Civil War. A physical ailment prevented him from joining the Confederate army. Instead, he accepted an appointment from the governor of North Carolina to be an agent to Britain. Two significant works that Peyton produced as a result of his time abroad are The American crisis, or, Pages from the note-book of a state agent during the Civil War and Rambling reminiscences of a residence abroad. England—Guernsey and Rambling Reminiscences of a Residence Abroad: England-Guernsey. These works and his letters give insight into Peyton’s attempts to gain aid for the Confederacy in the form of firearms and foreign recognition. John Lewis Peyton succeeded in obtaining firearms, but he and other state agents failed in gaining recognition from the Confederacy.

Letters are the primary source that can be used to determine why John Lewis Peyton went to England and what he accomplished there. In addition to Peyton’s own letters, North Carolina governor Henry Toole Clark maintained correspondence with Peyton and the Confederate Secretary of War, George Randolph. These letters provide important insight into Peyton’s mission to purchase arms for the state of North Carolina.

Upon arrival in England, Peyton experienced difficulties in his mission. In his December letter to Governor Clark, Peyton stated that he was not “able to get anything [in England] upon credit. At the period of [his] arrival, there were no arms to be had here.”[1] This letter captures the initial difficulty that Peyton experienced in England. His first few months in the country were spent meeting with Confederate commissioners, British officials, and travelling around the country.

It was not until late in 1861 that Peyton sealed a deal for the purchase of rifles. This is confirmed through a letter between North Carolina Governor Henry Clark and Confederate Secretary of War George Randolph. Clark writes that he was “notified of the shipment from England on board of the Southwick of a lot of Enfield rifles for the state of North Carolina bought by her agent.” In addition, the Southwick was “loaded with arms and munitions for the Confederate government.” With this deal, the state of North Carolina and the Confederacy secured two thousand Enfield rifles that arrived in Wilmington, North Carolina in April of 1862. With Peyton’s deal successful, “he remained in Britain as a ‘Confederate State Agent’ for the duration of the war” serving as a diplomat in order to “obtain official recognition of the Confederacy.” This shipment of rifles was very important to the Confederacy due to the high quality of the Enfield and the quantity of the rifles. John Lewis Peyton’s mission in England provided much-needed firearms to North Carolina and the Confederacy in the early years of the Civil War.[2]

When the American Civil War broke out, there were several official Commissioners sent by the Confederate government to seek support and recognition from Great Britain. However, there were also a number of agents, such as Peyton, who worked backstage in private meetings and rallied support among the British public in order to try to sway the government and the people. Therefore, the Confederacy operated on different levels of diplomacy. The state agents appear to have been more successful in consolidating the support of members of the upper class than in appealing to the general public. This ended up hurting the Confederacy. John Lewis Peyton’s position reveals the many different levels of diplomacy in the Confederacy and the challenges that came with that.

The agents abroad, both official Confederate commissioners and individual state agents, did not have a great deal of practice in the field of diplomacy. The commissioners, especially in the beginning of the war, “left a great deal to be desired.”[3] Peyton himself did not have much experience in such a position. The Confederacy appears to have underestimated the challenge at the beginning of the war when they were confident of victory. It is clear from the beginning of Peyton’s time in England that the diplomats on all levels faced considerable challenges due to their lack of experience and communication with the Confederacy.

Peyton spent the majority of his time abroad in London and among officials, aristocrats, and the wealthy. In his Rambling Reminiscences of a Residence Abroad: England-Guernsey, Peyton devotes a chapter to the discussion of the poorer areas of London. He speaks of the working class sections in derogatory terms. He describes the working class as owing “nothing to society but a bitter grudge” and he even blames the French Commune for ruining this class.[4] By only listening to the aristocrats and high officials who were supporting the Confederacy, and consistently trying the same approach of gaining support, the agents like Peyton made little headway in their mission.

While it is apparent that there was sympathy for the Confederacy in Britain, there was also a great fear that the war was going to enter British soil. Peyton states “the British Lion was greatly incensed at the prospect of being unceremoniously drawn into the conflict.”[5] Thus, the efforts of Peyton and the other agents, vying for recognition and aid, may have caused Britons to distance themselves from both the North and South. Peyton’s position may have garnered support from some members of Britain’s upper class, but he and others ultimately failed to gain recognition of the Confederacy.

Overall, John Lewis Peyton succeeded in acquiring weapons, but he also failed in gaining the recognition the Confederates wanted so much. Peyton’s aid in gaining Enfield rifles may have helped the Confederate war effort, but in a sense, people can thank John Lewis Peyton and the agents for their diplomatic failures, for the war put an end to slavery and solidified American democracy.

Doyle, Don Harrison. The Cause of All Nations: An International History of the American Civil War. Basic Books, 2014.

Peyton, John Lewis. The American Crisis, or, Pages from the note-book of a state agent during the Civil War Volumes 1 and 2. London: Saunders, Otley and Co., 1867.