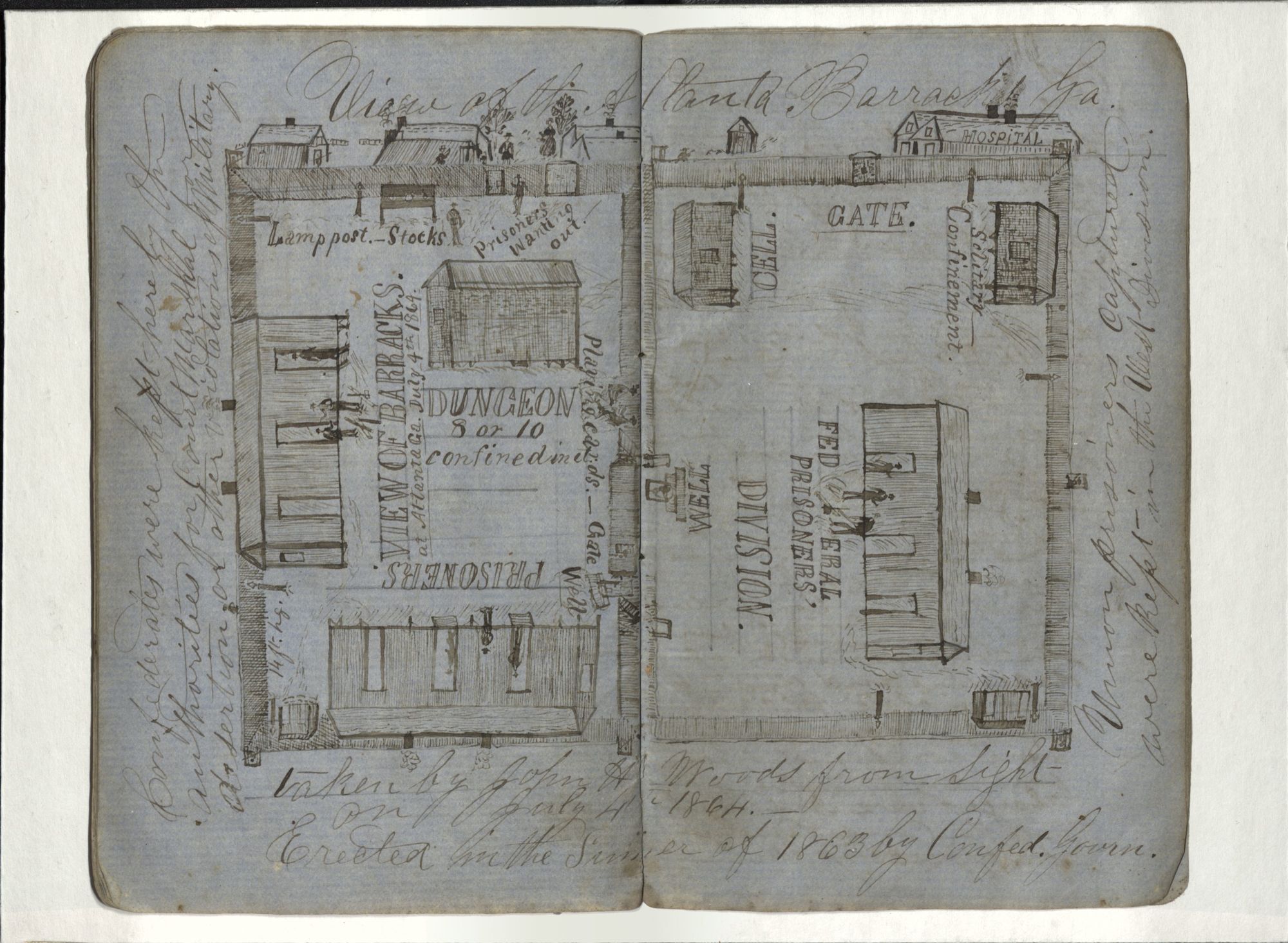 In 2017, Virginia Tech Special Collections acquired a set of six diaries and memoirs written John Henning Woods, a white Confederate Unionist. Despite being a native of Tennessee and the son-in-law of a powerful Alabamian slave-holder, Woods despised slavery and the Confederacy. Woods refused to join the Confederate Army in the beginning of the war but was drafted in late 1862. Once a soldier of the Confederacy, Woods created an underground unionist ring within the Southern ranks and plotted a mutiny with fellow Union sympathizers. The plot was discovered, however, and Woods was tried, imprisoned, and sentenced to death for treason. After traveling through a number of prisons throughout the western theater of the war, his sentence was first delayed and then finally removed altogether by Jefferson Davis in late 1864. After his stay of execution, Woods was sent to build defenses around Atlanta until his escape to Union lines in early 1865. The diaries and memoirs tell the story of Woods’ experience during the war, giving us incredible insight into the lives of Southern unionists.

In fall semester of 2017, VCCWS director Paul Quigley and Graduate Teaching Assistant Katelyn Brown taught an undergraduate research seminar at Virginia Tech that focused on relating Woods’ writing to the larger context of the Civil War. Each student read the memoirs and picked an aspect of Woods’ experience that they wanted to learn more about, including slaves’ religious practices, medical care in prisons, and female experiences of the war, among others. Students then conducted primary and secondary research and produced a research paper that connected Woods’ writings to larger themes. Finally, each student distilled his or her research into a webpage.

Those webpages are published here.* We invite you to follow the links below and explore the topics that these students chose to pursue. We also invite you to take a look at the Woods’ memoirs, available online at Virginia Tech Special Collections.

The Secret Societies of the South: Southern Unionist Societies During the Civil War. By Allie Bochna

Religion and Resistance in Enslaved Communities. By Courtney Ebersohl

Healing Without Supplies: Confederate Medical Care for Prisoners of War. By Samuel Lee

Long Distance Love and Hardship in the Civil War. By Meghan McAuliff

The Debate About Lincoln: What did Southern Unionists Think of the Great Emancipator? By Renee Sheridan

Sunday Morning Politics: Religion During the Crisis of Secession. By Emily Stewart

What to do When the Union is Falling Apart. By Madlyn Williams

*Views and opinions expressed within these exhibit pages belong to the student authors.