In 1847, Breckinridge used his legal expertise and outstanding oratory skills to serve the state of Kentucky in the Mexican-American War where he would serve on the staff of Major General William O. Butler. After the war, he returned from his non-combative role to Kentucky, more experienced and ready to pursue political office.

Breckinridge was elected to the Kentucky House of Representatives in 1851, where for the first time he would defend the institution of slavery on constitutional grounds, defending the rights given to states by the United States Constitution. His advocacy for state’s rights made him a Democratic Party favorite and national symbol in the fight against open interpretation of the constitution. In 1856, at the age of 34, he was elected the 14th Vice President of the United States under James Buchanan. Breckinridge remains the youngest person ever elected to the Vice Presidency. 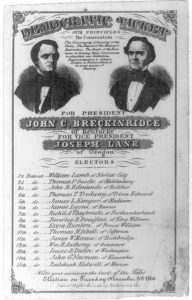 At the end of his Vice Presidency, following a failed run for President in 1860, Breckinridge was elected to become a Senator for his home state of Kentucky. He immediately began speaking on the floor of the Senate, delivering powerful messages on behalf of states’ rights advocates across the nation. Breckinridge believed that if Congress could legislate on the issue of slavery, they could legislate on any issue, giving the government and more directly, the executive branch arbitrary power. He believed there could be no such thing as a flexible constitution; the rights it gave were hard-lined, absolute and far from open to interpretation.

For months, Breckinridge battled the Republican controlled government of the United States, pleading for a peaceful end to the developing conflict. In his eyes, the actions of the government and more specifically, President Abraham Lincoln, were unconstitutional and needed to be corrected. Breckinridge criticized the use of the U.S. Navy to establish blockades of southern ports and trade routes and the suspension of habeas corpus in the case of citizens placed under arrest and detained by military forces. Breckinridge furthered his argument in the Senate by bringing attention to the infringement upon citizens’ rights granted by the second amendment to bear arms based upon suspicion, and the fact that the majority of United States soil was under martial law.

Knowing full well that the Confederates were going to lose the war, Breckinridge worked toward laying the groundwork for an appropriate surrender for the Confederacy. Fearing that the North would erase southern history, he collected the government and military archives of the confederacy in order to ensure that they were captured intact by the Union army. On April 9, 1865, General Robert E Lee surrendered the Army of Northern Virginia to Union General Ulysses S. Grant at the Appomattox Court House in Virginia. This was not the formal end of the Civil War, but it indeed signaled that the end of the war was near. Breckinridge would flee the United States and spend the next few years seeking political asylum in Cuba, various European countries, and Canada.

Breckinridge would return to the United States after being granted amnesty by President Andrew Johnson. He returned to Lexington, Kentucky with his family and would later die from wounds sustained during the Civil War. After multiple surgeries, Breckinridge died on May 17, 1875 aged 54, and was buried in his hometown of Lexington, Kentucky.

The legacy of John Cabell Breckinridge lives on to this day as a man many harbor ambivalent feelings toward. Neither an active advocate for slavery, nor an active advocate for emancipation, Breckinridge stood nearly alone in a divided nation with only one mission that he wished to accomplish. His highest hope was to bring about a peaceful solution to the American Civil War. Breckinridge’s place was not on the battlefield; rather he belonged on the floor of the Senate, trying to bring about peace in the Union without the use of force. Unfortunately, he never accomplished that mission and civil war would consume the United States for four years after his departure from the United States Senate. Whether it was speaking to the Senate, speaking to citizens in the streets, or commanding troops on the battlefield, John C. Breckinridge stood tall in the face of adversity and was a beacon of hope in dark times for many white southerners. Staying true to his values, he fought hard for his interpretation of the rights and freedoms of states granted by the Constitution.