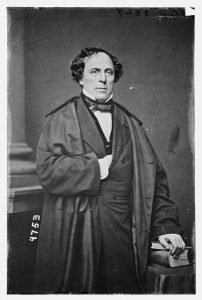 John B. Floyd (Library of Congress).

John Buchanan Floyd (June 1, 1806 – August 26, 1863) served in many political offices as well as some military positions throughout his lifetime. He began his career as a lawyer, moved to the Virginia state legislature, was elected governor of Virginia and later appointed to the position of Secretary of War in James Buchanan’s cabinet. Militarily Floyd served as a Brigadier General in the Confederate army during the American Civil War, during which time he lost the major battle at Fort Donelson.

John Buchanan Floyd was the son of John Floyd, who served as governor of Virginia from 1830-1834, and Letitia Floyd (Preston), who was his connection to the Preston family and Smithfield Plantation. He attended South Carolina College and graduated in 1829. Floyd returned home and began practicing law in Virginia. Soon after his return home Floyd married Sarah Buchanan Floyd (Preston).

In 1834, Floyd, his wife, and one of his brothers moved to Arkansas during the cotton boom. Initially Floyd was very successful in cotton farming but after the escape of a number of his slaves, along with the panic of 1837, Floyd and his brother incurred heavy debts losing their farm. It was also during this time that Floyd nearly lost his life to a fever forcing him to return home to recover. After his recovery Floyd then continued to practice law in Virginia.

In 1847 Floyd began his political career when he was elected to the Virginia General Assembly as a member of the Democratic Party. Two years later he was elevated to the position of Governor, after he ran on a platform of internal improvements to the western counties of the state.

Immediately after his election Floyd called a state constitutional convention in Richmond that lasted nearly a year (1850-51). This convention would come to be known as the Reform Convention. Two of the most notable reforms implemented by the convention involved the appointment of representation and the qualifications for voting. By the end of the convention the poorer, western part of the state gained more representation against the eastern majority. In another major victory for these poorer farmers, the requirement of land ownership for suffrage was removed. Election of the governor was also opened to the general public and the governor’s term was changed from three years to four years.

Outside of these reforms Floyd is remembered as being one of the loudest opponents to the Fugitive Slave Act of 1850. He went as far as to advocate a retaliatory tax on any northern products until the northern states agreed to stop resisting enforcement of the Fugitive Slave Act. This suggestion was quickly rejected by the Virginia legislature and was not well received elsewhere in the South.

Upon completion of his term in 1853 Floyd retired from politics and resumed his law career. His retirement did not last very long because in 1855 he jumped back into the political arena in an attempt to defend the Democratic party from the Know-Nothing party that formed following the collapse of the Whig party. 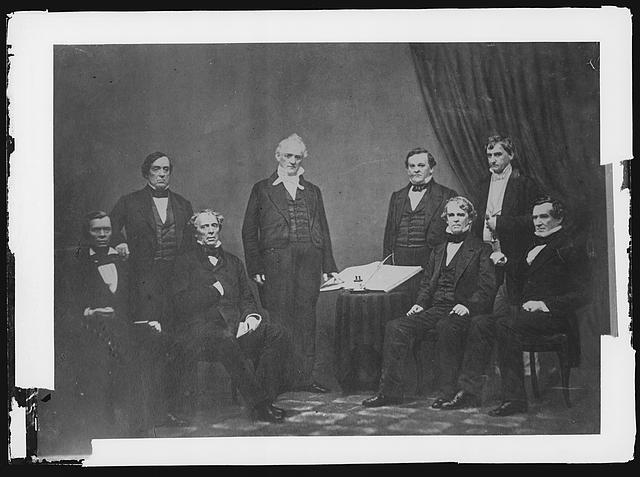 President Buchanan’s cabinet, including Secretary of War John B. Floyd (Library of Congress).

As a reward for his faithful service the new Democratic president, James Buchanan, appointed Floyd as Secretary of War in 1857. Buchanan’s administration has been widely seen as corrupt and ineffective and yet Floyd’s time in the War Department still stood out.

The first major event in Floyd’s term as Secretary of War was the Utah War, later dubbed “Buchanan’s Blunder.” The conflict officially began in 1857, when a number of federal officials reported that the Mormons had risen in rebellion against the United States Government.

In response President Buchanan decided to replace Brigham Young with an outside governor. He also sent 2,500 troops with him, fearing that the Mormons would resist the change. When Young heard of this plan he declared martial law in the territory. The Utah militia then burned three supply trains and drove government cattle into the Great Salt Lake Valley in an attempt to delay the incoming troops. Their plan worked and forced the US troops to spend the winter near a destroyed fort.

The conflict eventually ended without any casualties on either side. During the winter of 1857 there an additional 3,000 troops were were sent to the Utah territory to strengthen the force that was there. Because of harsh criticism, President Buchanan decided to send an amnesty delegation to speak to Young, who proved willing to compromise.

While Floyd did not have a very heavy hand in the implantation of this mission he did release a statement as Secretary of War: “From the first hour they fixed themselves in that remote and almost inaccessible region of our territory, from which they are now sending defiance to the sovereign power, their whole plan has been to prepare for a successful secession from the authority of the United States, and a permanent establishment of their own.”[1] This suggests a lack of understanding of the situation, especially after learning of Young’s willingness to compromise with the delegation sent by President Buchanan.

The next issue Floyd was implicated in was the padding of government contracts and misappropriation of government bonds. While he was never brought to charges on these implications throughout the course of the investigation his name was brought up often.

The investigation brought forward a number of communications that show Floyd referring to large sums of money in the time of the missing bonds. The report that was written by the United States congress alleges that Floyd padded various government contracts that were eventually used as collateral for bonds from an Indian trust fund. In total it was estimated that over $800,000 had been abstracted from the Department of the Interior.[2]

Floyd appointed Joseph E. Johnston, a family member who was also often mentioned in the investigation into the misappropriation of bonds, to the position of Quartermaster General of the Army over more senior and more respected men including Robert E. Lee and Albert Sydney Johnston. This appointment eventually created a dispute between Floyd, Lee, A.S. Johnston and Jefferson Davis who carried the dispute to Richmond when he was President of the Confederacy.

Floyd was accused by many northerners of funneling excess arms and supplies from northern armories to southern ones in excess of their requirements. Floyd had over 115,000 muskets and rifles sent to southern arsenals between 1859 and 1860. Some say this was in order to make room for new rifles in Northern arsenals. If this was the case, it was very unfortunate timing.

In the fall of 1860, some of Floyd’s gun transactions began to be called into question. Soon after, Floyd was asked to resign by President Buchanan due to the number of blunders he was involved with. Floyd however, lingered and just before he officially submitted his resignation President Buchanan received a protest from Pittsburgh ironworkers about the 124 cannons that were being readied to be sent to the South.[3] Floyd left Washington, disgraced, and returned to his native state of Virginia.

Floyd’s military career began in May 1861, after the secession of Virginia, when he was commissioned as a Brigadier General in the Confederate Army. Initially he was involved in some minor military engagements in Western Virginia alongside Robert E. Lee. None of these early battles were of significance; however, Floyd did gain some notoriety.

Eventually Floyd was assigned to Fort Donelson, a small fort located on the Cumberland River in Tennessee. Floyd arrived at the fort in February of 1862 and was soon besieged by a combined ground and naval force under the command of Ulysses S. Grant. The fort was able to turn away the naval bombardment so Grant laid siege to the small fort. After two days the Confederates attempted to break out. While the fighting during the attempted escape was fierce the confederates were ultimately unsuccessful.

Fearful of being captured because of the conditions under which he had left Washington, Floyd, his second in command, and 1,500 of the garrisoned soldiers snuck out during the dead of night. Floyd traveled west and escaped from the Union troops. The command authority eventually worked its way to Simon B. Buckner who was forced to accept surrender. Within a month of this blunder Confederate President Jefferson Davis relieved Floyd of duty.

Floyd returned to Abingdon where he was appointed a Major General in the Virginia militia. For a time he was traveling the countryside recruiting and working with partisan bands. However, because of the hardship of combat along with the fatigue of constant travel Floyd’s already poor health worsened. He died on August 23, 1863.

Floyd may have been successful at attaining high rank in his political and military career but was very unsuccessful when it came to performance of his duties in those positions. Floyd left behind a legacy of mediocrity and failure in his public life.

[1] Message of the President of the United States to the Two Houses of Congress, Vol. 2 (Washington: Cornelius Wendell, printer, 1957), 7.