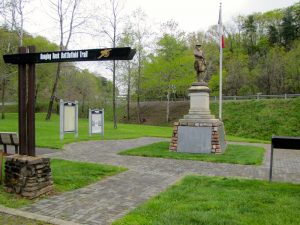 In the summer of 1864, Union general David Hunter advanced on the important railroad hub at Lynchburg. He turned away from the city after a few hours of heavy fighting, short on ammunition and feeling outnumbered due to arrival of Confederate reinforcements under Jubal Early. In retreat, Hunter decided to travel across the mountains into West Virginia rather than risk a withdrawal back down the Shenandoah Valley.

Early pursued Hunter, but could not pin him down before the majority of Union soldiers reached the safety of West Virginia. Early did meet with some success, though, in capturing Hunter’s supplies and spare artillery. On the morning of June 21, the Union rear guard wagon train moved through Hanging Rock, near Salem, Virginia. There, Brigadier General John McCausland attacked the rear of the Union force. During the commotion, Hunter sent his artillery along another route, but, without a force to guard it, a detachment of McCausland’s troopers were able to disable several guns and carry off Union horses. Confederates captured ten guns and various other supplies, and the Union suffered around thirty casualties. Hanging Rock was the last engagement between the two forces under Early and Hunter. 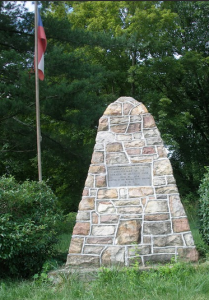 The site of the battle has not been preserved, but several monuments and displays on the engagement can be seen around Exit 141 off I-81. The most significant of these is an assortment of interpretative signs at the parking lot for the Hanging Rock Battlefield Trail. A statue of George Morgan Jones, a philanthropist from Lynchburg, Virginia, is also situated near the entrance to the Hanging Rock Trail, though he has no connection to the Battle of Hanging Rock. To find the parking lot, take Exit 141 and go 0.6 miles on VA-419 North, then turn right onto Dutch Oven Road. The parking lot is 0.1 miles along Dutch Oven Road.  In addition to the signs, there are two monuments related to the Battle of Hanging Rock dedicated by different chapters of the United Daughters of the Confederacy. One of these can be found along VA 311 North/Catawba Valley Drive, and the other is on the side of VA-419 near the I-81 overpass.

Hanging Rock is located near the city of Salem, one of the targets of Stoneman’s Raid in 1865. Downtown Salem boasts a 1910 Confederate monument and local history exhibits at the Salem Museum (810 East Main Street). Several unknown and known Confederate dead, some killed at Hanging Rock, are buried at East Hill Cemetery (corner of East Main Street and Park Avenue), including Sergeant James Walton, a gunner in Lee’s army who fired some of the last shots at Appomattox Court House. Four Union soldiers are buried in the cemetery as well.