Since the time of Daniel Boone, the Cumberland Gap served as the primary route through the rugged Cumberland Mountains separating southwestern Virginia from eastern Kentucky. When the Civil War began in 1861, many expected the Cumberland Gap to be the site of a great battle because of its strategic importance. Union leaders hoped to use it as an avenue of invasion into East Tennessee, a region of strong Unionist sentiment, and Southwest Virginia, an area rich in natural resources essential for Confederate victory. As the war dragged on, the Gap changed hands four times, but was never taken by force. Though the commanding heights overlooking the mountain pass made attack nearly impossible, the rugged terrain in and around the Gap offered little sustenance for its defenders. The greatest threat to soldiers manning the various forts on the hills overlooking the Cumberland Gap was hunger and the threat of starvation, rather than military might.

Brigadier General Felix Zollicoffer and his Confederate forces occupied the Cumberland Gap at the beginning of the war. The Gap saw little action until spring 1862, when Union forces, at President Lincoln’s behest, attempted to take the Gap in order to liberate the loyal citizens of East Tennessee. In March and April 1862, Union general Samuel P. Carter ordered his men unsuccessfully to take the mountain pass. After being repulsed multiple times, Carter’s forces gave up but remained in eastern Kentucky to observe Confederate defenses. While they blocked the Gap to the north, another group of Union soldiers entered Lee County, Virginia, surrounding the Confederates. Running low on supplies, Confederate troops under Brigadier General Carter Stevenson abandoned the Cumberland Gap to Union forces under the control of Brigadier General George W. Morgan on June 18. A few months later, Confederate general Edmund Kirby Smith ordered 20,000 Confederate forces to block the Gap’s north entrance in Kentucky and another force to occupy the southern entrance in Tennessee. Union soldiers held the high ground and could repulse any Confederate attack, but the siege soon took its toll. On September 17, 1862, the Cumberland Gap changed hands a second time as Morgan’s troops abandoned it, burning their remaining supplies and pushing their heavy artillery pieces down the mountain.

Various Union commands moved into southwestern Virginia and East Tennessee and met with a significant amount of success in the spring and summer of 1863. Confederate supply lines along the high mountaintops around the Gap grew untenable. Since Union forces controlled so much of the surrounding territory, the Gap’s strategic importance waned and on September 10, 1863, the 2,500 Confederates at the Cumberland Gap surrendered without firing a shot. It remained in Union hands for the duration of the war. With the loss of the Cumberland Gap, the Confederacy effectively lost control of East Tennessee and much of southwestern Virginia.

The Cumberland Gap National Historic Park’s visitor center provides a detailed summary of the Gap’s various military engagements. Earthworks from Fort Pitt/Nathaniel Lyon are still visible, as is an original gun that was rolled off the mountain after the Union abandoned the Gap in 1862. Fort Pitt/Lyon is probably the most western Civil War site in Virginia. 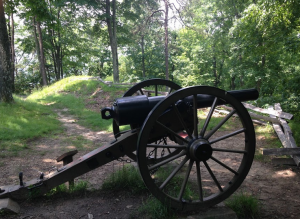