Confederate monuments standing in cemeteries and on courthouse lawns are often the most visible reminders of the Civil War in Southwest Virginia. While very few battlefield sites lie in this corner of the state, the counties south of the Shenandoah Valley and west of Roanoke sent thousands of young men to fight for the Confederacy. In the postwar years, mostly around the turn of the twentieth century, local groups and philanthropists dedicated to preserving the memory of the region’s role in the conflict built obelisks and statues honoring Confederate soldiers. 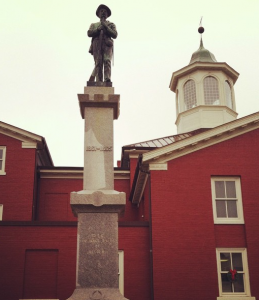 Buchanan: Botetourt Artillery Obelisk, 1902 (19559 Main Street, Buchanan, Virginia). This obelisk, dedicated to the Botetourt Artillery, also contains a tribute to Confederate women and a rare mention of disease in the Civil War, the cause of more deaths than battlefield injuries.

Fincastle: Courthouse Obelisk, 1904 (20 East Back Street, Fincastle, Virginia). This monument, on the grounds of the Botetourt County Courthouse in the small county town of Fincastle, names all the companies from Botetourt County that served in the Confederate forces. Like the one in nearby Buchanan, Fincastle’s obelisk mentions disease, women, and even the “dark reconstruction years.”

Common Soldier Monument, 1920 (Lee Street between Cumberland Street and Scott Street, Bristol, Virginia). This monument honoring Confederate soldiers of Virginia and Tennessee was donated to the Bristol chapter United Daughters of the Confederacy by a former Confederate soldier, James M. Barker. It has been moved twice from its original location near the old courthouse (razed in 1970).

Grundy: Courthouse Tablet, 1998 (1012 Walnut Street, Grundy, Virginia). The commemorative tablet at the Buchanan County courthouse in Grundy, placed in 1998 by a local Sons of Confederate Veterans chapter, lists several Confederate units from the area, including a Kentucky unit. A state historical marker nearby states, “In October, 1864, the Union General Burbridge passed through Grundy on his raid to Saltville.”

Hillsville: Courthouse Common Soldier, 1907/8 (515 North Main Street, Hillsville, Virginia). Hillsville’s monument, like the one in Lebanon, was moved from the middle of the street. It now stands on the grounds of the historic courthouse, built starting in 1870–the year Virginia rejoined the union. Hillsville was the first stop on Stoneman’s Raid in Virginia in the spring of 1865.

Floyd: Courthouse Common Soldier, 1904 (100 East Main Street, Floyd, Virginia). This tribute is interesting for its reference to the county’s Confederate dead as “our fallen braves.” The implicit comparison of Confederate soldiers to Native American warriors is perhaps designed to lend the boys of 1861-1865 an air of nobility and courage tempered by the futility of their cause.

Christiansburg: Courthouse Obelisk, 1883 (intersection of Main Street and Franklin Street, Christiansburg, Virginia). This is the earliest Confederate monument in the region.

Pulaski: Common Soldier Monument, 1906 (58 North Washington Avenue, Pulaski, Virginia). This soldier, a quintessential “ragged rebel” complete with torn trousers, stands ready for action across from the old Pulaski railroad depot. Frederick W. Sievers, a sculptor most famous for his statues of Stonewall Jackson and Matthew F. Maury on Monument Avenue in Richmond and the Virginia Monument at Gettysburg, designed this statue.

F. W. Sievers’s sculpture of a young Confederate atop the Pulaski County monument. His twin stands in Abingdon. (Tom Seabrook)

Lebanon: Courthouse Common Soldier, 1914 (Intersection of Main Street and Church Avenue, Lebanon, Virginia). Lebanon’s monument, “a loving tribute to the past, present and future,” originally stood in the middle of Main Street.

Abingdon: Courthouse Common Soldier, 1907 (191 East Main Street, Abingdon, Virginia). The soldier atop this monument is also a creation of Frederick W. Sievers and is identical to the statue in Pulaski. Abingdon’s monument bears a longer inscription, including the only Latin phrase found on a Southwest Virginia monument: Fortitude et Pecte Pro Patria (Courage and Strength for Country) and a tribute to women.

Emory: Confederate Cemetery Obelisk, c. 1900s (Cambridge Avenue, Emory, Virginia). This monument stands in the Holston Conference Cemetery, honoring the final resting place of over 200 Confederate soldiers who died in the area, including at the Battles of Saltville. Emory and Henry College was home to a large Confederate hospital during the Civil War. This cemetery dates to the establishment of that hospital and includes many who died there. The monument dates to the early twentieth century.

Cove Mountain Battlefield Tablet (Crocketts Cove Road, Wytheville, Virginia). This tablet marks the site of the May 10, 1864, Battle of Cove Mountain, fought between Union general William Averell’s large cavalry force and Confederates under John Hunt Morgan and William “Grumble” Jones. Averell’s push towards Wytheville was repulsed by the combined Confederate forces after several hours of hand-to-hand combat. Wounded Federal troopers were left behind at the Crockett’s Cove Presbyterian Church (built 1858), where several died and were buried in the churchyard. Bloodstains from wounded Union soldiers may still be visible in the church, as they were noted in the 1992 National Register of Historic Places nomination.