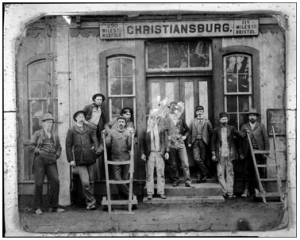 The town of Cambria, originally known as Bangs, grew up around the Virginia and Tennessee Railroad depot, first built in 1856 about a mile away from the Christiansburg town square. Union forces under General George B. Stoneman burned the original depot and destroyed tracks in April 1865 during their raid into Southwest Virginia. In 1868, a new depot was constructed in the Tuscan Italianate style. The Christiansburg Depot is one of only two railroad depots in Virginia built during the Reconstruction period and still standing today. The other stands in Rural Retreat, near Wytheville. In 1906, Cambria incorporated as a town and a new passenger station was built down the tracks east of the old depot, which was converted to a freight station. The old depot was the hub for all goods shipped by rail into Montgomery and Floyd Counties for almost a hundred years, until service was discontinued in 1960. The 1868 building was restored in the 1980s. 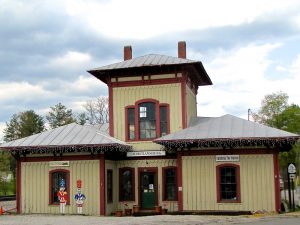 From Blacksburg, take 460 Eastbound to the Downtown Christiansburg exit. Take the first left at the traffic light immediately after exiting onto Cambria Street. Follow Cambria Street until it becomes Depot Street at the Cambria Depot.