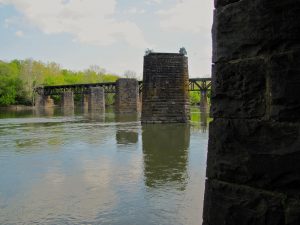 After the Confederate defeat at the battle of Cloyd’s Mountain on May 9, 1864, Union forces under the command of General George Crook moved toward Central Depot to burn the 700-foot covered wooden railroad bridge spanning the New River. This bridge was the main target of the attacking Union forces. It had long been a Union objective, since it was the weakest point along the Virginia and Tennessee Railroad. As the Federal forces approached the long bridge, the outnumbered Confederates withdrew across the New River after destroying some heavy guns—in order to defend the bridge and Central Depot from the opposite bank. The Confederates were able to take several smaller artillery pieces with them and an artillery duel raged across the river for several hours. Union soldiers placed several rail cars loaded with hay inside of the covered bridge and prepared to set fire to it. Captain Michael Egan of the 15th West Virginia Infantry Regiment swam out, climbed the bridge piers, amid the artillery duel, and set the bridge on fire.  As the bridge fell into the New River, the regimental band for the 23rd Ohio Infantry struck up a tune to celebrate the Union victory. This was a major setback for the Confederacy, as the bridge, a major supply artery for the Army of Northern Virginia, was out of commission for several weeks. 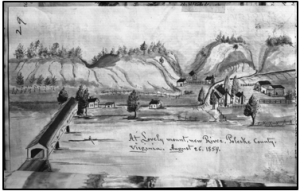 From Blacksburg take Prices Fork Rd. west, turn right onto Route 114, and left onto Route 11, where you will cross the New River. The site of the bridge, including the remaining piers, can be viewed from David Bisset Park on Berkley Williams Drive. Turn left into the parking area and continue under the Lee Highway bridge to the farthest overflow lot.  Near the river in Radford stands the Glencoe Museum, located in the c. 1870 home of Confederate general Gabriel Wharton. Arnheim, the c. 1838 home of Dr. John Blair Radford, for whom the city is named, is visible from Dalton Drive, though not open to the public. Union forces shelled Arnheim from the Pulaski side of the river during the Battle of Cloyd’s Mountain, believing the house to be Confederate headquarters.