Learning that the Union forces in and around the Cumberland Gap numbered less than six hundred men, Confederate brigadier general William E. “Grumble” Jones crossed the Clinch River on January 2, 1864, with 2,000 men and moved his force northwest toward the important mountain pass. Unbeknownst to the Confederates, Union commanders at the Gap had learned of a Confederate force in the area and sent the Sixteenth Illinois Cavalry, commanded by Major Charles H. Beeres, to find it.

On January 2, Beeres drove several hundred of Lieutenant Colonel Auburn Pridemore’s Confederate cavalry troopers out of Jonesville, the small seat of Lee County, Virginia. The Union troops bivouacked in the town that night. In the early morning of January 3, however, Jones surprised the Union camp, attacking from the west. Over the course of the day, Union artillery changed hands and the Confederates retook the town of Jonesville. Caught between Pridemore to the east and Jones to the west, Beeres realized the futility of his situation and the Union force surrendered. In their victory, the Confederates captured 383 Union soldiers, three artillery pieces, and twenty-seven wagons. The victory was tarnished, however, when Jones learned that the Union defenders at the Cumberland Gap had been reinforced and any attempt to take it would be futile. Union surrender effectively left Lee County in Confederate hands through the rest of the war. 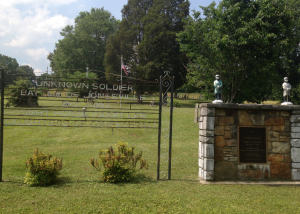 Memorial sign and marker for Confederate soldiers killed during the Battle of Jonesville. (Lucas Kelley)

Jonesville is located along US-58, thirty-five miles east of the Cumberland Gap. The cemetery where the monument is located is on the west side of Jonesville along US 58 between Ely Street and Old Harlan Avenue. 500 feet west stands a historical marker, which gives an overview of the battle. The Dickinson-Milbourn House sits at the southwestern corner of Wilderness Road and Palace Street. It is a private residence, not open to visitors but visible from the street.

The War of the Rebellion: A Compilation of the Official Records of the Union and Confederate Armies, series I, volume XXXII, part 1, p. 57-64.