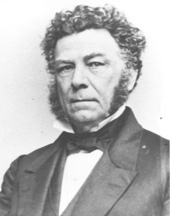 From the Old Dominion to the Palmetto State

William Campbell Preston was the son of Revolutionary War hero and US Congressman, Francis Preston, and his wife Sarah Preston. Preston attended Washington College but after his freshmen year (1809-1810) poor health forced him to withdraw. His father sent him to South Carolina to get better and while there Preston went to South Carolina College, graduating at the age of 18.

Upon graduation Preston went on a trip to the western United States and eventually to Europe where he enrolled at Edinburgh University, graduating with a law degree. In 1820 he returned to Abingdon, VA and married his first wife Maria Coalter (d. 1829). By 1824 the young couple moved to Columbia, South Carolina and Preston opened his own law practice.

“The God of Homer”

In 1828 Preston became a representative to the Lower House of the South Carolina State Legislature as a member of the Nullification Party. At the time of his election the 1828-1832 Nullification Crisis, triggered by increased import tariffs, was in full swing. Preston was elected because of his defense and support of John C. Calhoun’s idea of nullification (a state veto of federal law).

Preston was considered one of the best orators in America at the time, even being considered more persuasive than his distant relative, Founding Father Patrick Henry. Henry was described as having, “The blood of Homer in his veins,” but Preston was described in one newspaper article as “the God of Homer.” In 1833 Preston was appointed by the South Carolina Legislature to the US Senate to finish out the term of Stephen D. Miller, and later to his own term in 1838.[1]

Unfortunately being a god was not good enough to save Preston from political annihilation at the hands of John C. Calhoun, South Carolina’s other senator. In a showdown over the subtreasury bill Preston and Calhoun split. Preston opposed the subtreasury with the Whigs on the grounds that it violated state’s rights. Calhoun switched his allegiance to his archrival President Martin Van Buren to support the subtreasury, in return for a north-south political alliance. Preston, unwilling to compromise his states’ rights principles, resigned in 1842 rather than surrender his beliefs.[2] 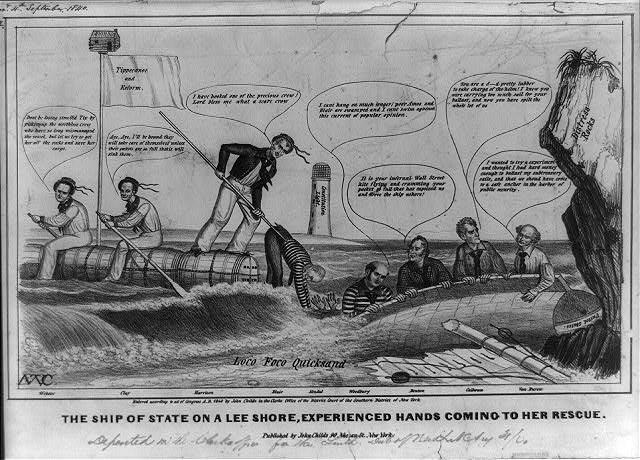 Political Cartoon illustrates Whig resistance to the subtreasury, the reason Preston resigned from the Senate. (Library of Congress.)

William Campbell Preston was a man before his time whose proslavery politics would have been timelier during the Secession Crisis in 1860 than during the Nullification Crisis. If Preston had not fallen to Calhoun and disappeared from the national arena in 1842, perhaps others would have identified him as a harbinger of the radical Southern politicians that would soon come out of the South screaming for Southern Rights and threatening disunion.

South Carolina’s unique geography allowed plantation agriculture to spread throughout most of the state because the population was majority slave. Therefore abolition threatened South Carolina’s white minority, leading it to create proslavery politics in order to protect white privilege.[3]

William Campbell Preston was a staunch supporter of proslavery politics and was its most vehement defender in the U.S. Senate during his tenure. He fully believed in the right of nullification and was even able to help convince John C. Calhoun in 1828 when he was still Vice President to write the South Carolina Exposition and Protest which defined nullification and a state’s right to secede.

Proslavery politics was designed to protect slavery and the slave economy, and that is why South Carolina fought so hard against increased tariffs on manufactured goods. Southern plantation owners feared Britain would raise its tariff on cotton as a result of increased U.S. tariffs on their manufactured goods. This would lead to lower profits, threatening the expansion of slavery and the slave system.

Preston understood this. As a South Carolina State Representative, he wrote South Carolina’s response to the tariff bill claiming that it discriminated against southern planters in favor of northern manufacturers and therefore should not be passed.[4]

Preston’s largest contribution to proslavery politics was his understanding that in order for South Carolina to win the slave debate, the whole South had to be united. Preston knew that the real sectional issue in America was slavery and the slave South would have to unite if it ever stood a chance against the free states.[5] Preston’s efforts to unite the South against the tariff ultimately failed, but they foreshadowed the future of American sectionalism.

Preston was a harbinger of the future radical southern politician. He defended slavery and states’ rights and supported nullification. The logical outcome to nullification was secession and Preston fully acknowledged that if slavery was ever to become threatened the southern states would have the right to secede from the Union.[6] If only Preston’s contemporaries had recognized what he represented, perhaps the United States could have been spared the nightmare of the Civil War.